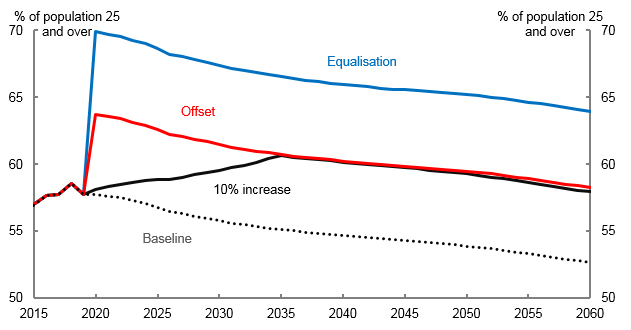 Higher labour force participation increases female retirement incomes, and reduces pension reliance and expenditure (except where it is offset by lower male participation). However, these results take a very long time to materialise. Pension reliance and expenditure in 2060 are affected by the labour force shocks introduced in the first year in 2020. The nature of the system means that it takes a long time for the impacts to stabilise following any change.

The impact of the scenarios on the Age Pension is small relative to the scale of the labour force change. Only the second scenario (equalisation at male participation rates) reduces pension reliance and expenditure by more than 10 per cent. The effects on women’s retirement incomes are somewhat larger across the scenarios, although not dramatic, apart from the equalisation scenario (chart 5). The 10 per cent increase in participation scenario, relative to the baseline, raises women’s average retirement incomes by about 5 per cent.  This reflects the fact that participation is only one factor impacting retirement incomes. We make no assumption about increasing female earnings or reducing the gender pay gap. 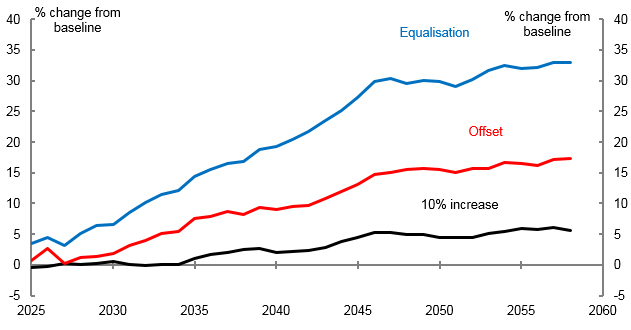 [1] The views expressed in this note are those of The Treasury and do not necessarily reflect those of the Australian Government. This note was prepared by Declan Trott, Wei Ying Soh, and Martin Stevenson and Rita Scholl in Revenue Group.